Here's a quick run-down of how I manually de-Obfuscated a URL from Evil VBA Macro.

First I was looking at this evil VBA Macro, but it's obfuscated and difficult to determine what it's doing. After crawling the VBA for a bit I noticed this line

Which looks like it's trying to create an Activex object to browse a url. A bit later I see this code.

Which looks like they're going to Send a "GET" request with that XMLHTTP object to a website. Notice though the URL is obfuscated, it's just a function call Redistribute(solov, 35). So I look a little higher and see that 'solov' is an array of integers (probably representing characters in the url).

And then I see Redistribute is a function that likely converts those integers to the actual url.


Now I'm lazy, and I don't want to read or understand the evil code. I just want to "safely" run it. So I rip out only the necessary code. Rename a few variables so it makes more sense to me. Add a MsgBox to the end of the code. Drop it into an empty Microsoft Word document's Document_Open routine, and boom, I have my url. 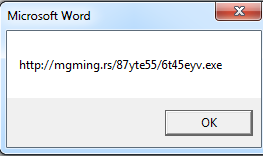 Of course always do this in a lab, a safe environment. Make sure the code you cut & paste doesn't contain calls to the actual ActiveX objects because then evil things may happen on your lab box. Instead just ensure it's a bunch of string concatenation, character conversions, etc. and then add a safe MsgBox to pop up a message box with your info you wanted. 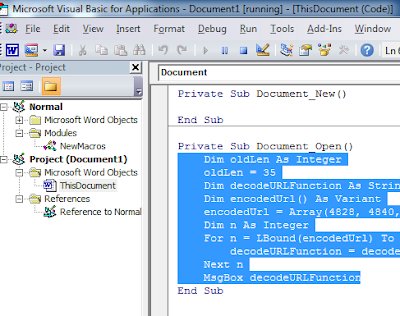 Copyright © 2015, this post cannot be reproduced or retransmitted in any form without reference to the original post.
Posted by neonprimetime at 5:46 AM